This is the imported thread (from our secondary forum) about the water-based long-running device which is running continuously since 4th March 2021: 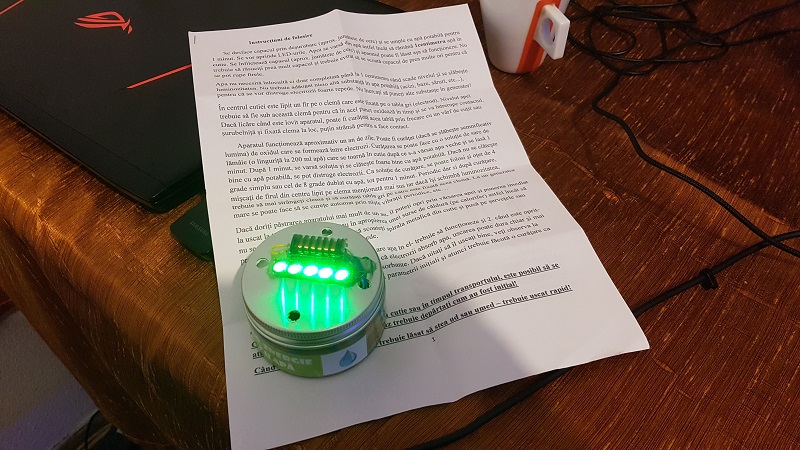 This is the imported thread (from our secondary forum) about the water-based long-running device which is running continuously since 4th March 2021:

Since 4th March I have this little water-based free-energy device running and powering 5 LEDs day and night so I think it proved its reliability and it's time to present it:

The device is invented by a Romanian named Iuliu Ionescu which have already a few Romanian and international patents and won a few European awards for his invention.
I acquired a prototype built by the inventor after waiting for a while on a long waiting list.

Don't make the mistake to think it's just another electrolysis-based device, this one is using drinkable water.
If salts, acids or bases are added to the water, they corrode and the electrodes are destroyed.
The device is designed to run continuously for about one year and after that a metal sheet inside needs to be replaced and it will run for another year.

The prototype I got is powering only 5 LEDs but there are other versions with 25 LEDs, the only difference is they have a more complex electronic module.
Here is a video showing the 25-LEDs version:

As I said mine is running since 4th March but I'm in contact with other Romanian having his device running for more than six months.
If you want more details I prepared a archive which can be downloaded here:

There is nothing "exotic" about the device but is still a long-time runner and is still free-energy as long as it's using only tap (drinkable) water.

This is the primary power source: 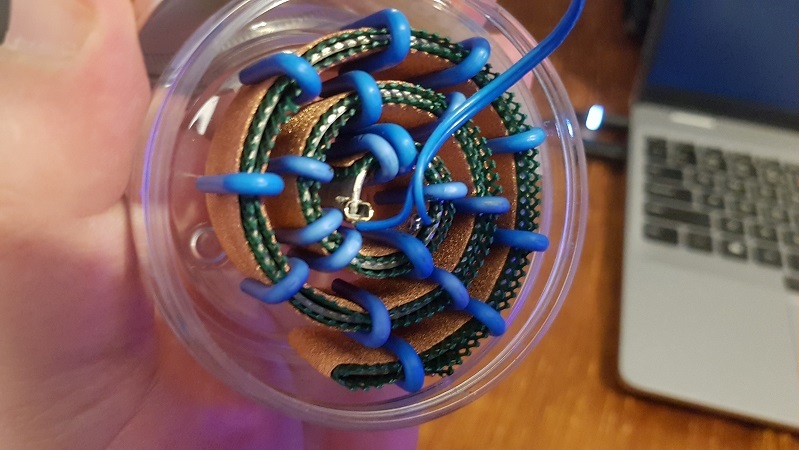 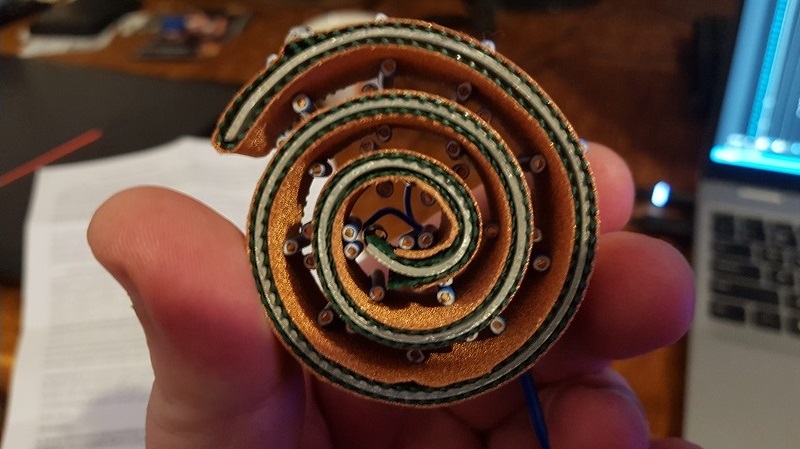 There is a known phenomenon that by putting two different metals (for example copper and zinc in our case) in close proximity and submerged in water (I'm not talking about electrolytes or acids) there is a very low voltage generated permanently. More details can be seen here:

As you can see in the photos in the middle is a metal sheet, over it is a sheet of water-retaining material and above that is a very fine mesh made of copper.
The blue thick wire clips are there just to keep all these as close as possible. The only thing which need to be replaced after about one year is the metal sheet.

Then the very low voltage generated by the primary power source is elevated by a what we call Joule-Thief, in the case of this device a very efficient one: 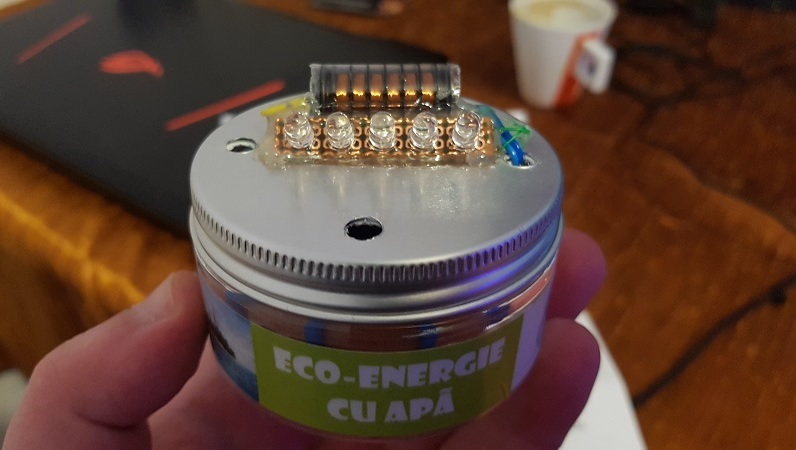 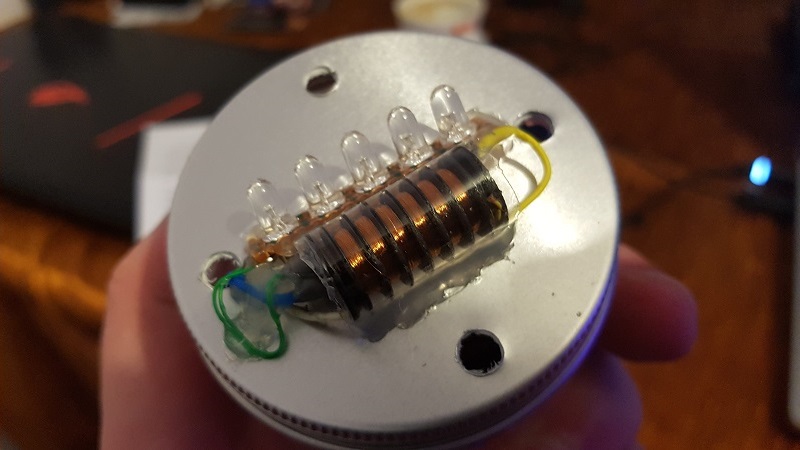 More details about Joule-Thief can be seen here:

Maybe you ask yourself why I'm interested in this device.
The reason is simple: even if it's using water it's still a free-energy and long-time running device.
Its only disadvantage is the fact that for now it's using water. Do not misunderstand, it's not consuming the water, the water is there just to facilitate the transmission of electrons between the two different metals. At intervals of one or one and a half months a few drops of water must be added to the existing water just because in time water is evaporating (which is a natural phenomenon).

If there would be a way to replace the water with a solid material (or maybe powder) which have the same electrical properties of the water then this device would be a powerful competitor of Akula's/Melnichenko's devices for a perpetual flashlight. A very strong one, even this one that I have can power a single powerful LED in a flashlight. And the 25-LEDs version would be more powerful.
I intend to build a replica of this prototype (I don't want to dismantle/break this prototype) so I can experiment and maybe I can find a way (if possible) to make it more solid-state so to speak.

Edit: you'll notice in the patents and in the user manual that the inventor is trying to present the device as using traditional battery technologies; as I understood that was necessary for obtaining the patents and to be able to participate at international invention contests - to stay as far as possible from the concepts as "perpetual motion devices", "free-energy" and other terms which are condemned and hated by the actual scientific establishment.

I think a way would be to use hydrogel, it is possible it could retain water if it's placed between two different metal sheets (copper and zinc) and the entire thing to be sealed so water could not evaporate. The question mark is about the electrical properties of the water retained in an hydrogel sheet and if it could stay this way for one year.

seems to be another variant of the joule-ringer-circuit on the switching stage. did you find any opposing-coil situation on that device? i like it! it's fantastic 😀

I'm not sure as I can't dismantle this prototype. The wires are glued and the transistor is also glued inside the ferrite core.
In order to gain access to all these I should break that glue and probably I'll damage the device.
It could have opposing coils as I see there 6 sections containing coils on the ferrite core, what could be the reason of those distinct sections then ?
It could have more secrets than the inventor says in patents and in the user manual.
I'll be able to know more after I make a replica so I can experiment with that replica.
I'm having some troubles trying to find that fine mesh of copper and also a ferrite core with 6 sections like that.
Probably it could work with other types of cores but I'm not 100% sure about that.

Hy Fighter
This system works with the quantum battery.
It is easier to use a small magnet to do the assembly instead of using rubber bands, with small magnets held together.
The recipe for one cell is:

copper and zinc  are diamagnetic

Repeat the process of stacking cells together to achieve higher voltages

In this device there are no magnets in the primary source (in water).
Very interesting concept, I'm trying to imagine how one cell would look like, could you give me a reference on how this kind of cell looks like ?
Who experimented with this kind of cell ? Any drawings and, if possible, images of this kind of cell ?
Thank you, I appreciate your help !

This type of cell was invented by a former British Army researcher over twenty years ago, Niguel Cheese. He's an extremely brilliant guy.
I already experimented with cell type several years ago and it works.
I am attaching you the youtube he made and that I had in an old file that I had.
I hope I can help you.

Another interesting document from Niguel Cheese
a magnet is what?

have several other files of him which could also interest you, but before tell me with google drive if you can see that file correctly ??

i like to see the video. please confirm my request. thx a lot!

Hi UndisclosedMember, you wrote:
i like to see the video. please confirm my request
do you mean that you cannot see the videoi do not understand?